Check out our latest newsletter here (you may need to scroll past the languages on the left).
Posted by Alex Stewart at 9:18 AM No comments:

Posted by Alex Stewart at 6:58 AM No comments:

Posted by Alex Stewart at 9:46 AM No comments:

Even before arriving at Zaporozhye Bible College and Seminary (ZBCS) I was intimately connected with them. Most of the teachers and leaders of the school are graduates from either Columbia Biblical Seminary (CBS; my alma mater) or Tyndale Theological Seminary. They are also closely linked with our mission agency, European Christian Mission. Most of the teachers/administrators are also pastors in the local churches. 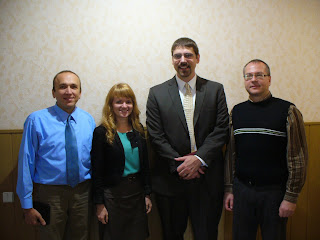 Our Tyndale graduates serving at ZBCS: Vladimir, Olga, and Vadim 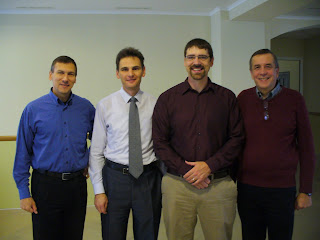 CBS graduates working at ZBCS (two more not pictured) It was amazing to find out that all of the Ukrainian teachers who studied at Columbia were there during the same years as Jenny and I. It is a small world after all! 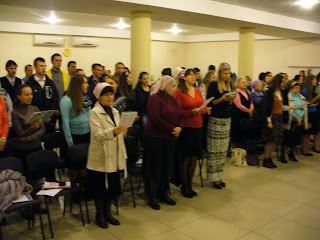 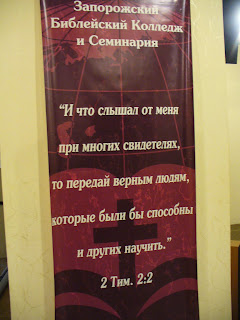 It was a pleasant surprise to realize that they shared our key verse!

In summary, although the Christians in Zaporozhye are a small minority they are faithfully serving God and tirelessly working to advance his kingdom. ZBCS is an essential part of this work as it trains pastors and Christian leaders for their city and the surrounding provinces. I was encouraged and enriched by being a part of this work. Thank you to everyone that supported Jenny and I with prayer this past week!

Posted by Alex Stewart at 7:56 AM No comments:

In general, the people in Zaporozhye expect Russia to continue pushing at some point. Zaporozhye is the province that Russia would need in order to have a land connection between Crimea and Donetsk. There are many refugees in Zaporozhye right now and some of the churches are actively reaching out to the refugees to provide food and clothing. Many people fled Donetsk by locking their homes and taking nothing but a suitcase. Nationalism is running high in Ukraine right now and Ukrainian flags can be seen all over the city. People in Zaporozhye definitely do not want to be part of Russia. 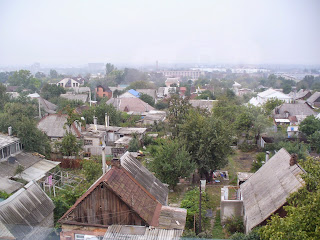 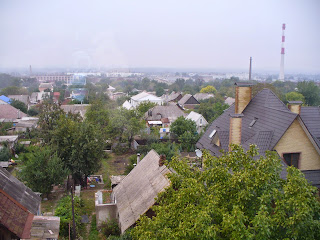 This is the view of Zaporozhye from the school (population 800,000). Ninety percent of the city was destroyed in World War II and the Soviet era apartments, factories, and warehouses have had little maintenance for decades.

The churches in the areas controlled by the separatists, particularly in Donetsk, have been greatly damaged and the Christians have been scattered. These difficult events have moved the Ukrainian churches to intensively pray for their country. They are praying that the fighting and subsequent economic difficulties will lead more Ukrainians to faith in Jesus Christ, that devastation would lead to salvation. Please join them in prayer for God to bring salvation to many through the seemingly senseless and unnecessary conflict.

Posted by Alex Stewart at 12:44 PM No comments:

The Ukrainian Church: Prayer with Tears

I recently returned from spending a week in Zaporozhye, Ukraine, teaching at Zaporozhye Bible College and Seminary (ZBCS). Zaporozhye province is a mainly Russian speaking province in the East of Ukraine. Although it borders the provinces which have seen recent fighting the fighting has not reached Zaporozhye. I have a lot on my mind and will break my thoughts into several posts. First up, the church.

On Sunday I preached at a small local church of about 60 people. Several things deserve comment. 1. The church was structured around three sermons! Time between sermons was spent on singing and prayer. I could only imagine a U.S. or Dutch church trying to have three different sermons on a Sunday morning :-) I was told that this tradition developed during the time of Soviet persecution when the churches never knew if their pastors and leaders would be arrested from one week to the next. There was a need for many people in the congregation to be trained so that the church would always have someone capable of preaching and teaching. 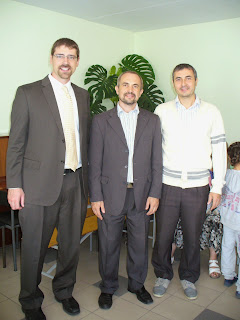 Here I am with the other two men who preached: the pastor Eduard (on the left) and Yuri, a deacon (on the right).

2. Prayer was heartfelt and genuine--mixed with tears. Between sermons there was time for anyone who wished in the congregation to lead in prayer. Although I could not understand the Russian language, prayer mixed with tears communicates in any language!

3. They had joy in the midst of difficulty. This was not a wealthy congregation; only two families in the church owned a car. After Ukraine gained independence some people who had connections in business became quite wealthy but the majority of the population in Zaporozhye did not benefit from this growth. 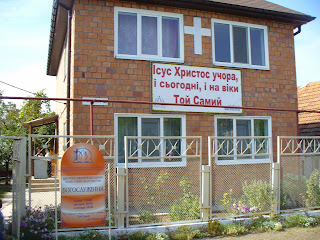 Christians in Zaporozhye are a minority but they are faithful. They love God and are active in outreach and discipleship. It was a joy to see Samiritan's Purse boxes here at the church; they use them in outreach and camps with children. It was wonderful to be able to tell the Christians there that many of our supporting churches helped send the boxes. I also assured them that churches in the U.S. and the Netherlands were praying for them during this difficult time in their country. There are 17 churches in the network of Christians that banded together to start ZBCS in 1994 when they gained the freedom to start a Christian school.
Posted by Alex Stewart at 10:56 AM No comments:

Here is our Sept. newsletter. I will post some about the church in Ukraine this next week or when I return.

Posted by Alex Stewart at 4:29 AM No comments: